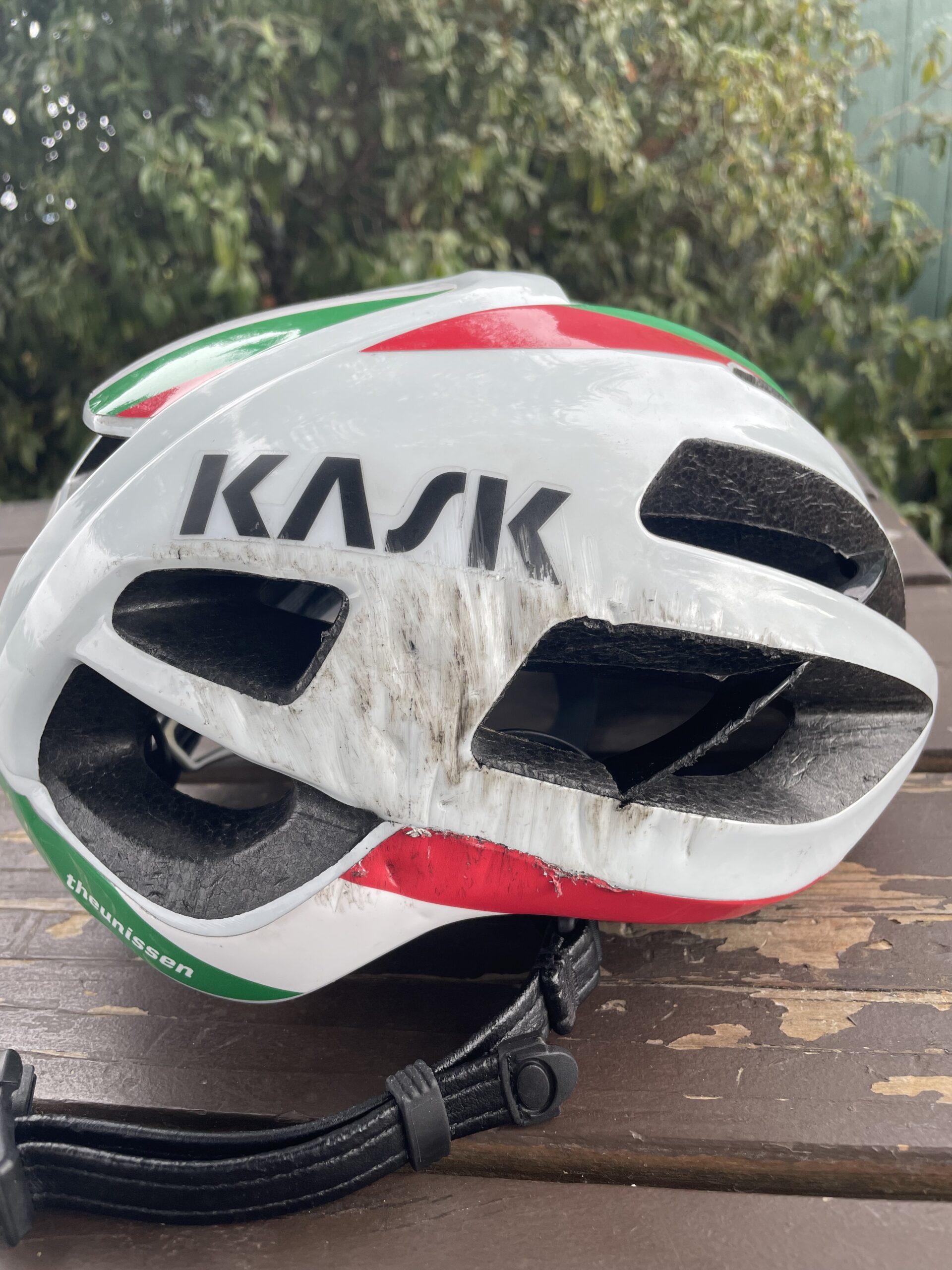 Gimmi and I were going on our weekly long Saturday ride, and started out going over Mt. Veeder. They had recently repaved the road with chip-and-seal and this was our first ride on the new surface. It was a bit rough, but felt nice and grippy… As we crested the top, we noticed a slight drizzle. Right. We did not think of what that might do on brand new somewhat oily surface…

As I went into the last sharp corner going down at around 30mph, my front wheel slipped out from under me and I went down hard onto the pavement. Head and right shoulder took the brunt of the fall and I remember the grating sound of my helmet on the chip-and-seal road and I came to a stop like a one would on a cheese grater. Gimmi was right behind me and slipped a bit but luckily managed to stay upright. As I lay in the middle of the road, I knew this was bad. The road rash looked bad, but more worrisome was my right shoulder, which was drooping and hurting a lot. I crawled to the side of the road and started assessing the damage. I probably had a slight concussion, because the road was fading in and out of my vision for a bit as Gimmi went looking for help.

There was no reception so he rode up to a house a little bit up from where I was so that he could call Maureen to come and pick me up. After about 15 minutes, a very friendly lady in a truck came by and offered to drive me down to Highway 29 so that Maureen could pick me up there.

I went straight to the emergency room at the Queen of the Valley hospital and stayed there for about 6 hours as they took x-rays, MRIs and cleaned me up. It was definitely a clavicle fracture, and they referred me to a orthopedic surgeon for a follow-up.

A few days later, a cycling buddy of mine gave me a wonderful shirt indicating that I was now in the Clavicle Club. Nice.

After talking to some friends, we decided to go to the UCSF Sport Medicine Clinic in San Francisco a week later, where they recommended surgery, since the fracture would not re-attach without some hardware. Another week later, they had me in the OR and did an amazing job putting in a plate with 7 screws.

Recovery would be 6 weeks in a sling, and then a month or two of physical therapy.

Very thankful that I didn’t hurt my head (the helmet was AMAZING… I ordered exactly the same one to replace it). My bike didn’t get too damaged (some scratches no the brakes and rear derailleur and I only needed a replacement derailleur hanger!). And very thankful for the staff at UCSF Sports Medicine Clinic. They were amazing.

A lovely day out on the bike riding from Mill Valley, through Ross and Fairfax…

I joined 2 friends in St. Helena to ride up Spring Mountain to Santa Rosa,…

I used Strava to plot the worst/steepest climbs around Napa against each other.