Netbook experience – I love my S10!

By Cobus Theunissen In Uncategorized

If you have been reading the tech news lately, you would have noticed a trend in mobile computing called Netbooks.  They are basically low-powered mini-laptops, typically with small hard drives, small screens, low-power CPU’s and GPU’s, built-in webcams and small batteries.  And they are cheap and small.

After looking around at a few devices (HP 2125, Asus eee, MSI Wind), I bought a Lenovo S10 (black model… they also come in white and red) for $499 from Circuit City (the 512MB/80GB version sells for $399!).  Besides liking the Lenovo brand (they took over the Thinkpads from IBM) I also liked the look of the S10.  It came loaded with 1GB of memory, a 160GB hard drive and a low-powered Atom 1.6GHz processor.  Not bad!  I since upgraded the memory to 2GB (additional $40) and installed Vista Business instead of the stock XP (other options were Linux, or a tweaked version of OSX).  The one big problem was that it did not have built-in bluetooth, but I fixed that by ordering a built-in card and cable from China.

I now use the S10 as my primary device when traveling and at the office, which is pretty much Mon-Thu every week.  Click through to read about my likes and dislikes.

Net-net, I think this computer is terrific value for money, and very enjoyable to use. The perfect tool to take to a meeting, the coffee shop, or on a flight, and surprisingly, to the office!

I tested the S10 against my loaded Lenovo Thinkpad T60p (which is a superfast laptop…) using common Office activities.  I tested it with the S10 plugged in (Balanced performance) and also while on battery power (Super Saver setting).  I will let you be the judge… while in power savnigs mode, the laptop definitely feels sluggish.  However, while in ‘Balanced’ mode, even though it is 30-50% slower than my T60p, it doesn’t bother me too much. 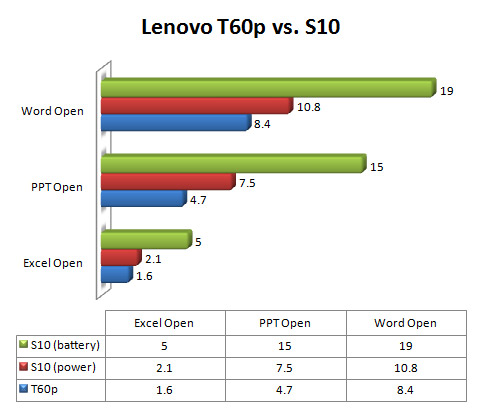