Is this the new input method for phones? 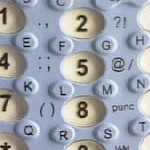 Digit Wireless came up with a very interesting text entry concept for cell phones. They don’t have number keys, but rather has letters between the keys on small raised keys. So, instead of pressing number 8, you actualy ‘by accident’ press the four letters around the space that would be the 8 key, which the keyboard then interprets as an 8! Quite a good concept! Would like to give it a spin though.